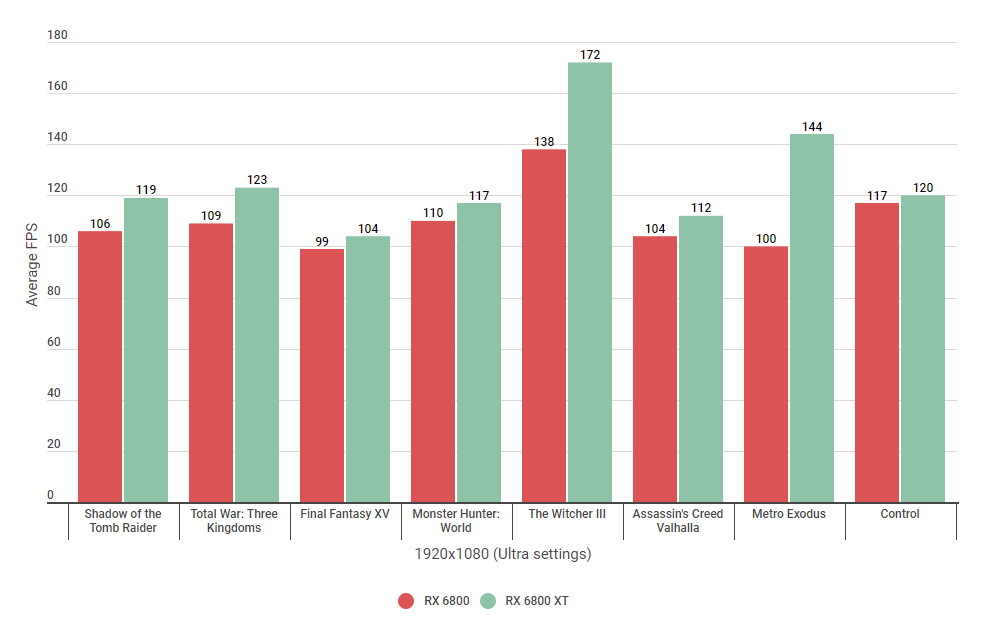 AMD’s long-awaited Big Navi GPUs, the Radeon RX 6800 and RX 6800 XT, are finally here. But how do they compare performance-wise and which one should you consider buying when they finally come back in stock? To help answer that question, I’ve put together some lovely bar graphs of my 1080p, 1440p and 4K benchmark results, showing you exactly how they stack up across all the major resolutions.

To test the RX 6800 and RX 6800 XT, I paired them with my usual Intel Core i5-10600K processor and 16GB of Corsair Vengeance LED RAM, and put them head to head in my suite of graphics benchmarks, taking an average frame rate from their own built-in benchmark tools or from my own repeatable manual gameplay tests. The games include a mix of blockbusters from the last couple of years: Shadow Of The Tomb Raider, Total War: Three Kingdoms, Final Fantasy XV, Monster Hunter: World, Assassin’s Creed Valhalla, The Witcher 3, Metro Exodus and Control.

I’ve also used AMD’s versions of the RX 6800 and RX 6800 XT, as these were the cards I used for my respective GPU reviews. I ran both cards at their default clock speeds as well, so the figures below should be pretty representative of what you’ll find on other types of RX 6800 and RX 6800 XT cards made by third party manufacturers. I’ve also kept ray tracing switched off for this particular comparison test, as I’ll be taking a closer look at next-gen ray tracing performance across all of the new AMD and Nvidia GPUs in a dedicated comparison piece.

Clearly, neither the RX 6800 or RX 6800 are going to struggle playing games at 1920×1080 for the foreseeable future, as even the RX 6800 is capable of hitting at least 100fps on max settings here, while the RX 6800 XT is often pushing 120fps. Of course, that’s hardly surprising given how expensive they are, and in most cases the RX 6800 XT has a decent lead on its non-XT sibling.

That said, there are a couple of games where the RX 6800 isn’t that far behind the RX 6800 XT. In Final Fantasy XV, I only saw a difference of around 5fps between each card, for example, and Control was even closer at just 3fps. I suspect this is likely due to the RX 6800 XT being limited by my CPU in these particular circumstances, as I saw a very similar thing happen with these particular games in my RTX 3060 Ti vs RTX 3070 comparison article as well.

When you’re dealing with powerful graphics cards like this at 1920×1080, any potential bottlenecks are almost certainly going to be related to your CPU rather than your GPU at this resolution, and it can make a surprising amount of difference to your PC’s overall performance. As such, you’ll likely see better performance from the RX 6800 XT at 1080p if you pair it with a more powerful processor, such as one of Intel’s Core i7s or AMD’s Ryzen 7 chips.

Still, as powerful as today’s graphics cards are, bumping up the resolution to 2560×1440 still puts the burden squarely back onto your GPU, making CPU bottlenecks much more unlikely. AMD’s two RX 6000 cards are still highly capable in this department, though, with the RX 6800 hitting at last 75-80fps in today’s big blockbusters, while the RX 6800 XT is hitting at least 90fps. 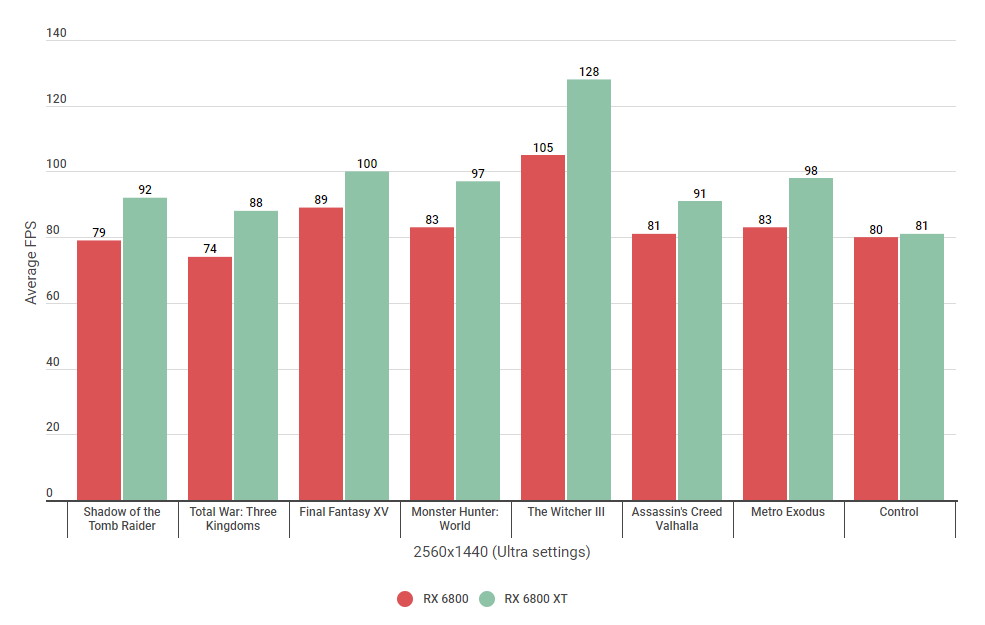 Again, there are exceptions to this rule. Control once again saw a nigh-on identical average frame rate from both cards – although the RX 6800 XT does pull ahead when you switch on the game’s ray tracing support. For the most part, though, there’s a clear gap between these two cards, with the RX 6800 XT leading by around 10-15fps depending on the title.

Of course, unless you own a high refresh rate monitor, opting for the RX 6800 XT won’t get you any benefit at all, as monitors with a standard 60Hz refresh rate will display the same 60fps regardless of which card’s inside your PC. Indeed, even if you do own a high refresh rate monitor that goes above 60Hz, I’m not sure I’d be able to tell the difference between 80 and 90fps without the aid of a frame rate counter. I might just about be able to distinguish between 105fps and close to 130fps in something like The Witcher III, for example, but 80-90fps is all much of a muchness to my eyes. As a result, it may be worth sticking with the regular RX 6800 if you’re planning to play games at 1440p, as I’m not sure you’re really getting one hundred quid’s worth of extra performance here.

If you’re aiming to play games at 4K, however, then you’re definitely going to get a lot more out of the RX 6800 XT. Admittedly, neither card is really fit for 60fps on max settings at this resolution, as you can see from the bar chart below. The RX 6800 XT gives it a pretty good shot, hitting 60fps in pretty much everything but two games on max settings, but there are still cases where it falls down closer to the 40-50fps mark, such as in Total War: Three Kingdoms and Monster Hunter: World. 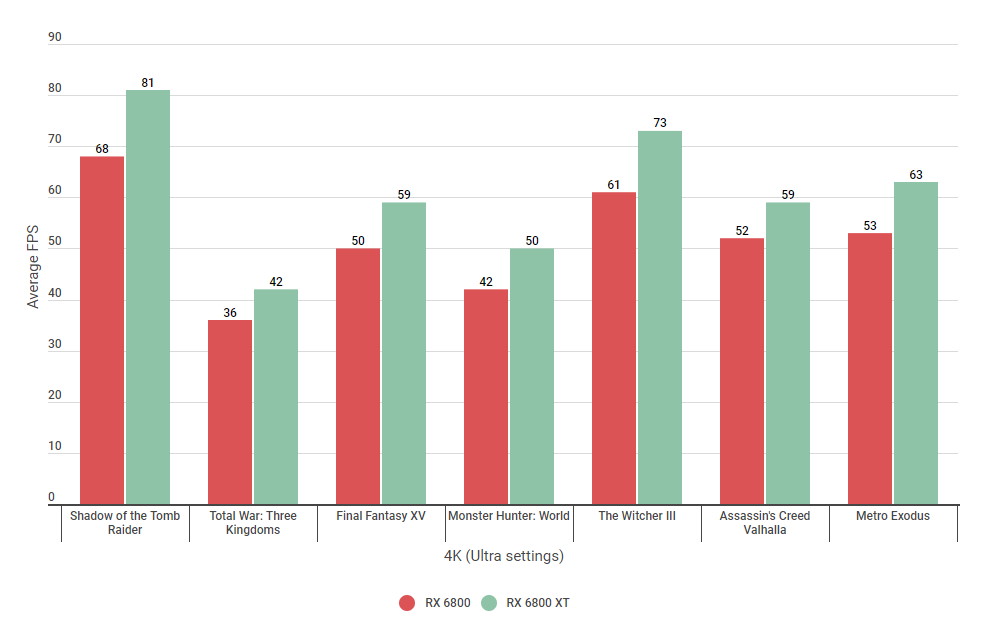 The RX 6800 XT also struggles with Control on max settings (although given its max settings are technically called ‘High’, I’ve included them in the chart below to avoid confusion). Here, the RX 6800 XT managed an average of just 45fps, which is still just about playable, but it’s very much on the borderline of what I’d call an acceptable frame rate.

Elsewhere on High settings, however, the RX 6800 XT does put in quite an impressive performance over its non-XT sibling. With the exception of Control, the RX 6800 XT delivers speeds well in excess of 60fps here, once again leading by 10-12fps over the RX 6800. Admittedly, the latter can also still just about hit an average of 60fps in most of my benchmark games on High, but there’s no denying you’ll get smoother overall frame rates by opting for the XT here. 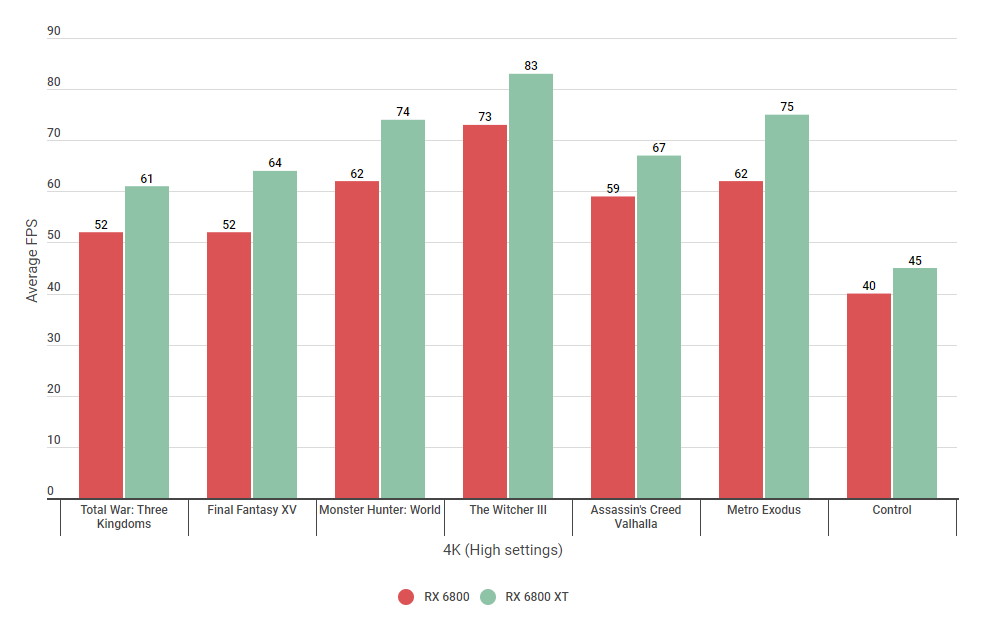 In Assassin’s Creed Valhalla, for example, the RX 6800 hit a low of 42fps in its built-in benchmark versus the 6800 XT’s low of 49fps, while Final Fantasy XV saw the RX 6800 hit lows of 48fps, which is almost 10fps below the RX 6800 XT’s low of 56fps. It’s a similar picture across other games, too, with the RX 6800 dipping much lower than the XT. As a result, the extra horsepower you get with the RX 6800 XT will help push those minimum frame rates up much closer to a more consistent 60fps, making it much more likely that you’ll be able to carry on playing games at this kind of quality setting in the years to come.

Whack the quality down to Medium, however, and the XT’s performance bump starts to become less obvious again. It still has around a 10fps lead on its non-XT sibling here, sometimes reaching closer to 15-20fps, but with high refresh rate monitors still being relatively scarce at 4K, you’re more likely to hit the 60fps threshold on both cards here, negating that extra lead offered by the XT. 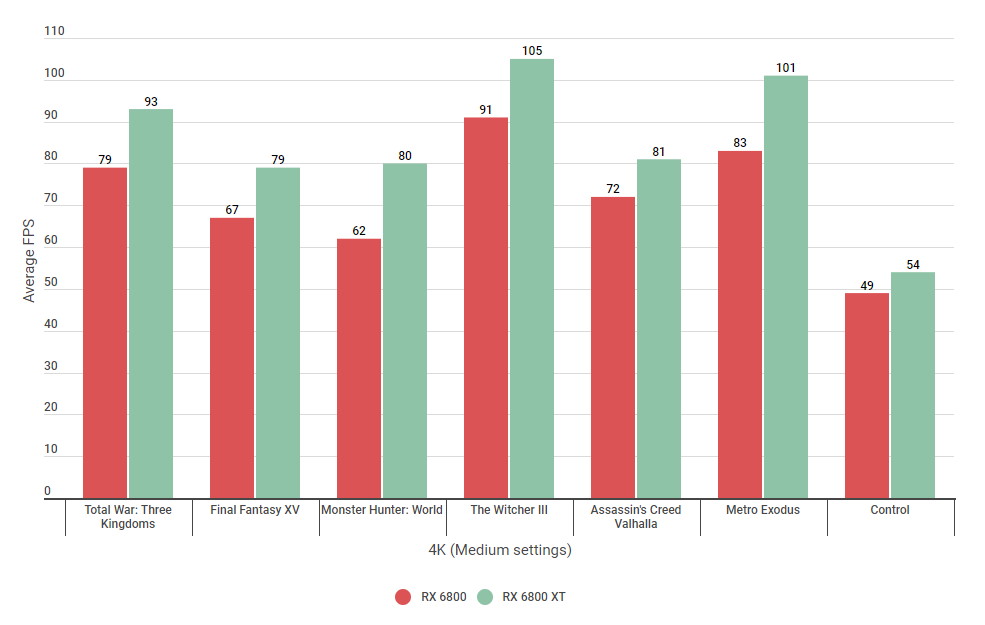 Of course, you could say the same about the RX 6800 XT’s speeds on High quality settings, and there is some truth in that. However, as I said above, if playing games as close to 60fps is important to you, then the RX 6800 XT is much more likely to achieve those kinds of frame rates on High than the non-XT version. On Medium, though, the RX 6800 has more than enough power to hit a consistent 60fps at 4K – although as Control once again proves, there will still be the odd game out there that taxes both cards equally, regardless of quality setting.

Overall, then, it’s clear that both the RX 6800 and RX 6800 XT are both incredibly powerful graphics cards, capable of filling out high refresh rate monitors at both 1080p and 1440p, and hitting consistent 60fps frame rates on Medium to High settings at 4K. However, while the RX 6800 XT is clearly the faster card of the two, I’d probably err on the side of the regular RX 6800 as being the better value card overall.

At 1080p and 1440p, I’m just not convinced you’re going to notice the extra performance offered by the XT at these resolutions, at least not when it comes to raw performance. Naturally, the RX 6800 XT’s faster frame rates do come in handy when you start throwing ray tracing into the mix, especially if you want to play games at 1440p. At the moment, the RX 6800 can do ray tracing at 60fps no problem at 1080p, but bump the resolution up to 1440p and you’re looking at frame rates closer to 45fps with the top RT settings enabled. The RX 6800 XT, on the other hand, might still struggle to hit 60fps at 1440p with maxed out ray tracing, but its smoother 55fps average frame rates are still pretty darn close. 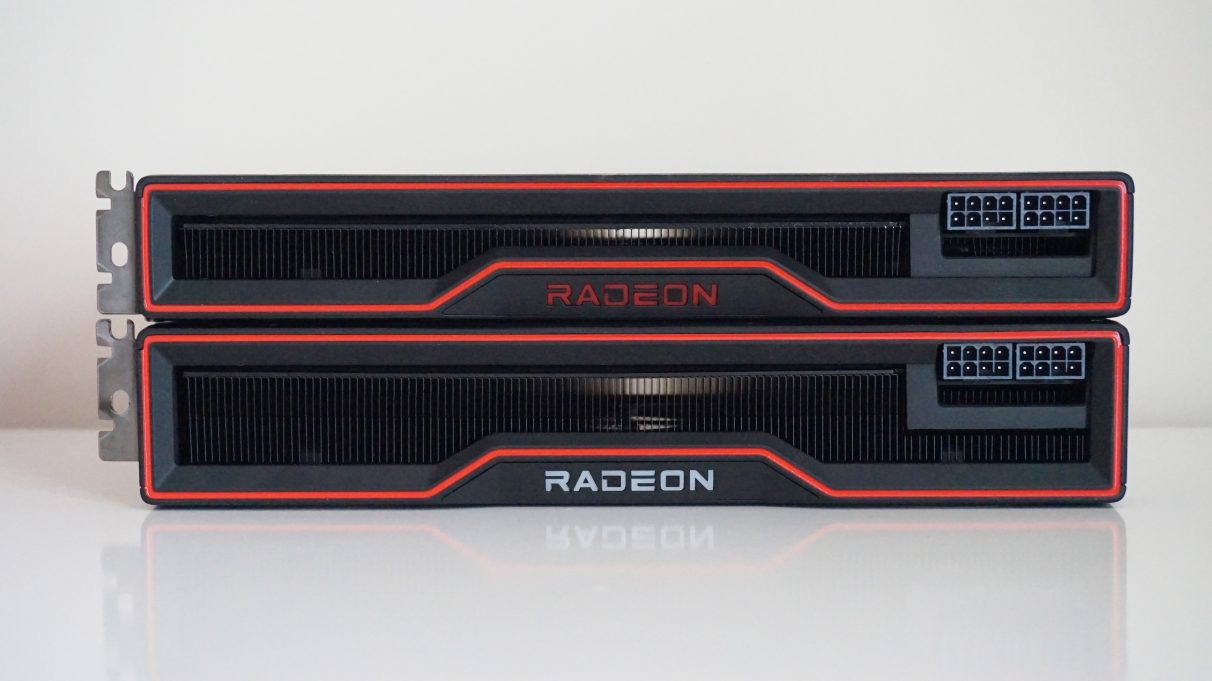 However, this situation will likely change once AMD launch their upcoming DLSS competitor tech, FidelityFX Super Resolution – although whether it will be as good at boosting each card’s performance as Nvidia’s DLSS tech remains to be seen. As I mentioned right at the top of this article, I’ll be doing a separate ray tracing comparison piece with all of today’s next-gen graphics cards very soon, so watch out for that to get a better idea of how things stack up.

In truth, you’re probably also better off going with Nvidia’s RTX 3070 instead of the regular RX 6800 for 4K gaming as well, as their respective speeds are both much of a muchness. Indeed, until AMD’s FidelityFX Super Resolution tech comes out, you shouldn’t really be buying either RX 6000 card for 4K gaming at the moment, as their raw performance just can’t compete with what you get with Nvidia’s RTX cards with DLSS turned on (although again I’ll be doing more in-depth benchmark comparisons between AMD and Nvidia’s new cards very soon).

Ultimately, though, I reckon the RX 6800 is the one to try and get out of AMD’s new crop of Big Navi cards when it eventually comes back in stock, especially if you’re after a top notch 1440p GPU. There’s no denying the RX 6800 XT has buckets of power at its disposal, but when it comes to overall value, the regular RX 6800 is tough to beat.