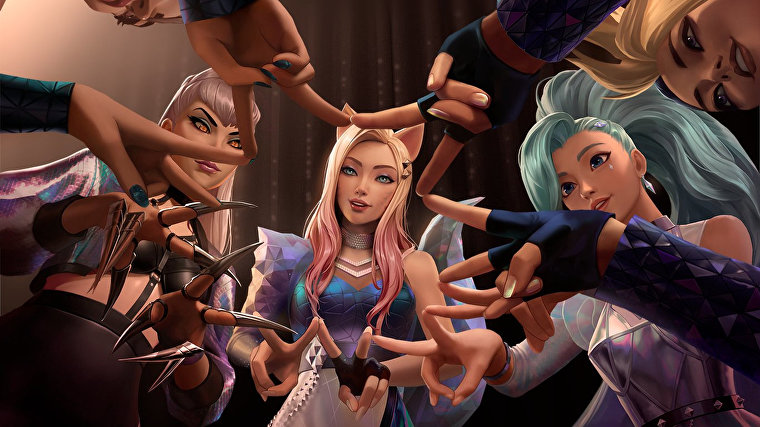 The best thing League Of Legends has done in years is create a virtual girl group, who now have a whole EP out. After years of ha-ha-hilariously cheesy promotional songs like Warriors with Imagine Dragons, Riot’s music team unexpectedly hit the big time in 2018 with K/DA, a group with real singers in the digital bodies of pop-ified alternate reality versions of League characters. K/DA’s debut song, Pop/Stars was straight-up a banger, and found play far beyond esports stadiums. Today K/DA’s first EP, All Out, launched and I think it’s time Riot give up League to focus on pop.

All Out is available to stream now on Spotify, Apple Music, and YouTube. I’ve not had a proper good listen yet. While I didn’t really dig the EP’s first single, The Baddest, the second, More, is a good’un:

It’s good! K/DA’s animation is weird though, not like real bodies. I mean they aren’t real bodies. But should virtual stars aim for real? Is the queer feeling of the uncanny valley meant to amplify enjoyment of their unreality? It’s especially jarring contrasting their dancing with their ‘candid’ gestures and expressions of intimacy. Is the fakeness part of the fun? I may be too old to answer these questions.

K/DA are a virtual girl group who share names and faces with League characters, but in the K/DA reality these women are pop stars instead of wizards and murderers. Except! League’s newest wiz, Seraphine, was first introduced singing with K/DA and in the game’s fiction she actually is an aspiring singer. And the More video is about her dreams of stardom? I’m losing track of the barriers between worlds. So to remove any continuity concerns, perhaps it’s best Riot knock the whole ‘League Of Legends’ bit on the head and focus on their strengths: pop.