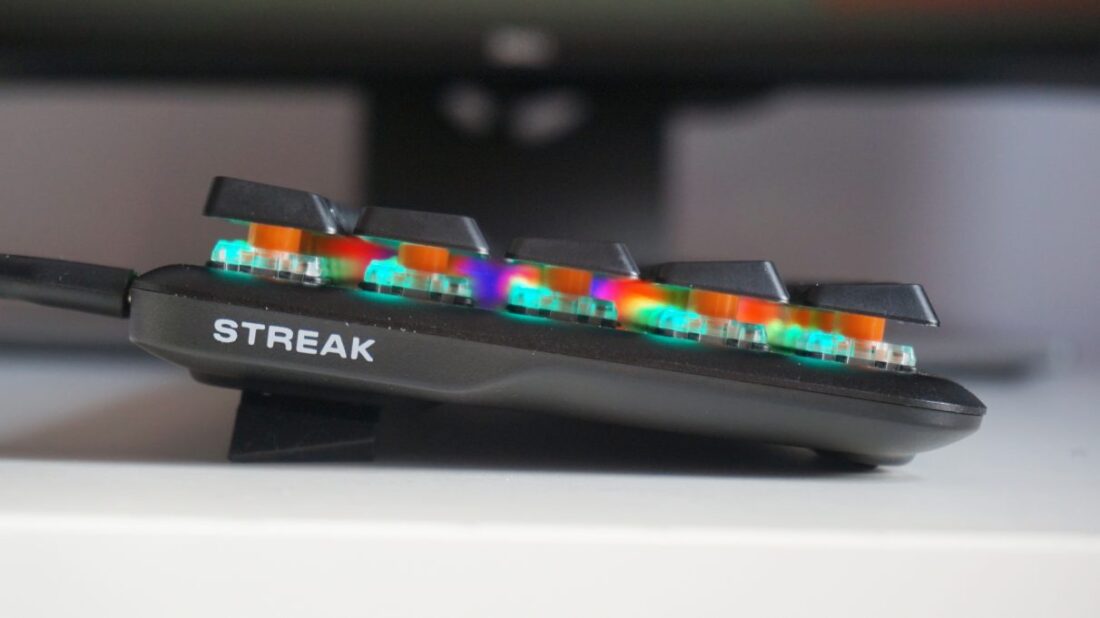 As I mentioned in my Roccat Vulcan Pro TKL review the other week, I’m a big fan of compact gaming keyboards. I rarely use the number pad that takes up so much room on full-sized keyboards, and I like the extra desk space tenkeyless ones bring with them by chopping it off. Go too small, however, and it starts to become less practical for everything else, as I found with the 60% HyperX x Ducky One 2 Mini. I can happily ditch a keyboard’s number pad, but I cannot abide losing my beloved arrow keys as well.

The new Fnatic Streak65 strikes this balance perfectly. As its name implies, this 65% gaming keyboard is a fraction larger than the HyperX x Ducky One 2 Mini, and that extra 5% makes all the difference. As well as providing enough space for those all-important arrow keys, you also get another four programmable macro keys that double up as your traditional Del, Ins and Pg Up and Down functions. It’s the best of both worlds, giving you an ultra-compact frame without compromising on practicality, and it’s another brilliant addition to Fnatic’s top-notch Streak family.

The full-sized Streak and tenkeyless miniStreak have been long-time favourites here at RPS, and the Streak65 distils both of those keyboards’ best features into an even smaller package for the ultimate compact keyboard experience. You still get a premium-feeling aluminium chassis, and Fnatic’s new low-profile Speed switches are just as beautiful to type and play games on as its siblings’ choice of Cherry MX switches.

Fnatic Streak65 review in a nutshell

The Fnatic Streak65 is a beautifully made 65% gaming keyboard that offers the best of both worlds when it comes to portability and practicality. It won’t be for everyone, but its sensible layout, customisable function buttons and slick, low-profile keys make it the best ultra compact keyboard I’ve tested so far.

Admittedly, the surface of the Streak65’s keycaps is perhaps a little more prone to picking up greasy fingerprints than Fnatic’s other Streak keyboards – although ’tis the season for chapped hands and all that, so I have been using more moisturiser recently. Besides, I only really noticed these blemishes in very bright sunshine, and for me at least it didn’t really detract from the overall look or build quality of the keyboard itself.

More importantly, they feel great under your fingers and thumbs, and it took no time at all to get up to full typing speed. Plus, I didn’t find myself tripping over its low-profile keycaps like I did with the Roccat Vulcan Pro TKL. Instead, their height and speed felt much more akin to my everyday Logitech G815 Lightsync (the wired version of the also excellent Logitech G915 Lightspeed Wireless), making it very easy to get to grips with. 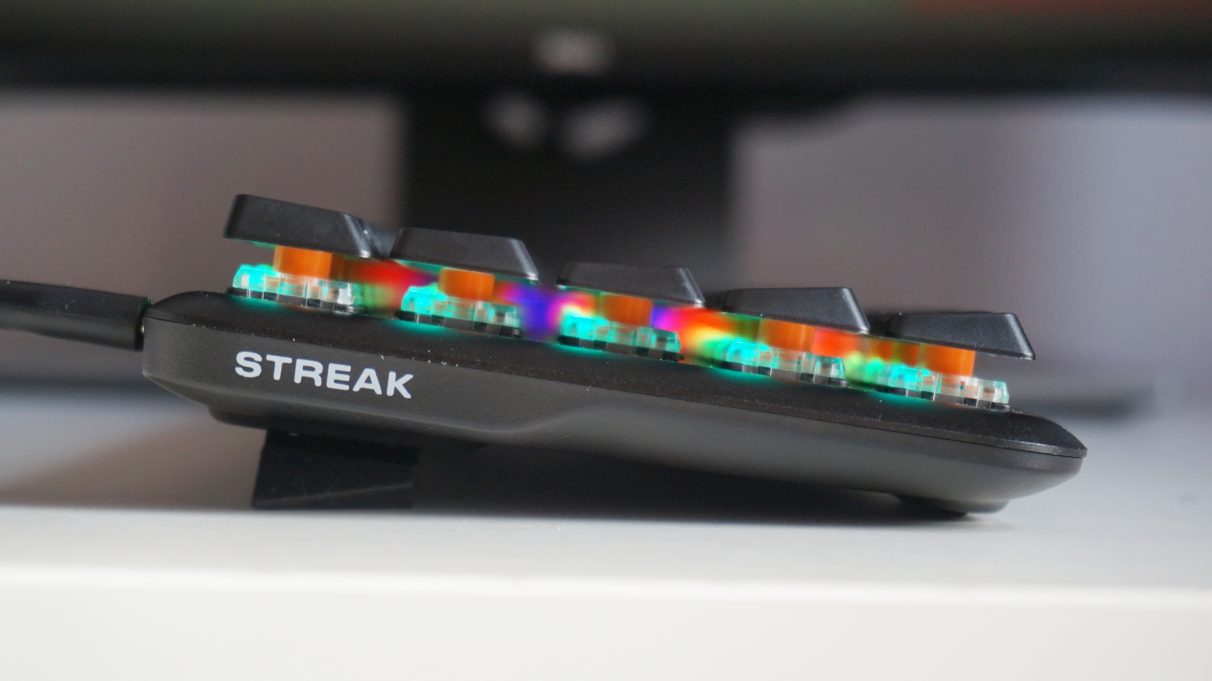 Fnatic’s Speed switches are exceedingly similar to their Cherry MX Speed counterparts on the Streak and miniStreak, too. While their travel distance and actuation points are actually a smidge shorter when you look at the numbers, in practice they feel nigh-on identical, easing that transition further if you’re a staunch Cherry MX user. After all, we’re only talking points of a millimetre here, so you’d have to have particularly sensitive fingers to notice the difference. In short, you don’t have to press down particularly hard in order for each key press to register on the Streak65, and their linear up-and-down motion still provides plenty of tactile feedback to make them good typing keys.

Their sound levels aren’t too CLACKY CLACK, either. They’re still on the anti-social side if you’re within earshot of another human being, but they’re not so loud that they grate on the ear – especially if you’re only doing small taps playing games. Finally, its detachable USB-C to USB-A cable makes it easy to replace if it gets lost or damaged. 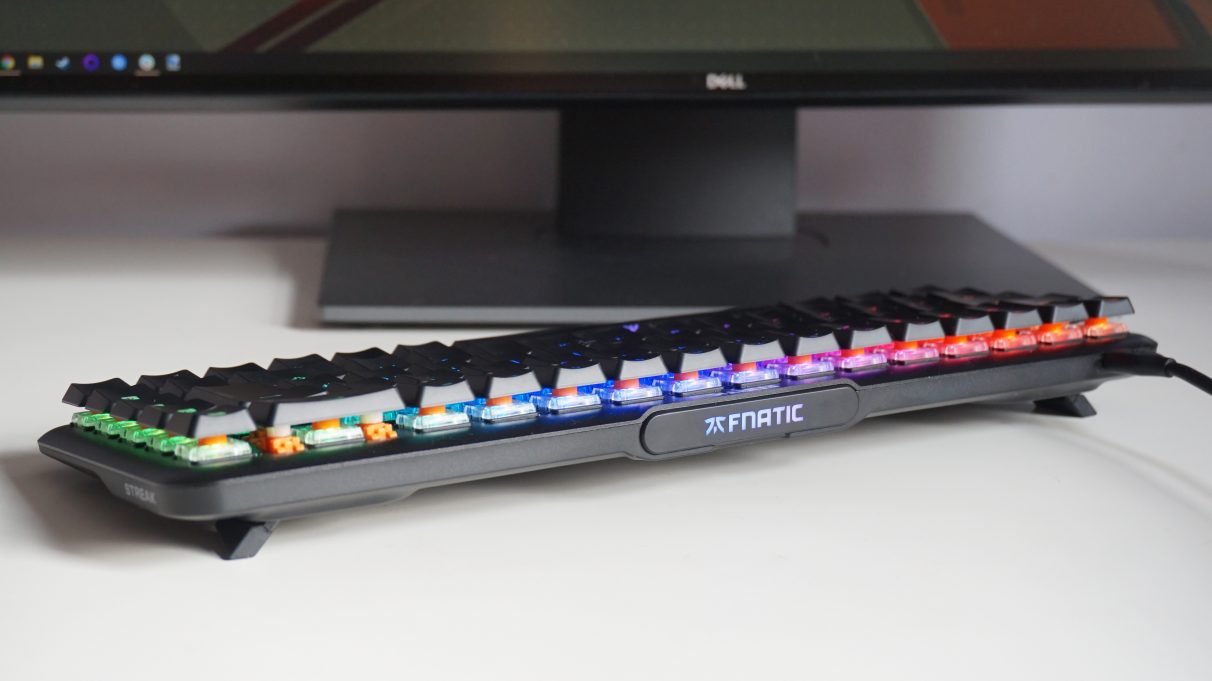 You can also customise each and every key using Fnatic’s OP software. Personally, the number of double functions already in place on the keyboard is more than enough for my brain to handle, but every key is fair game here if you really want to personalise it to the nth degree. You can also use OP to customise the Streak65’s RGB lighting, too, although there are already four onboard profiles you can switch between by pressing Fn + Tab if the default rainbow breathing isn’t to your liking.

Naturally, its small size means there are some features you miss out on compared to other similarly-priced gaming keyboards. Larger keyboards around the £110 / $110 mark are much more likely to offer things such as USB passthrough for your mouse as well as dedicated media keys and volume wheels, for example, which the Streak65’s titchy chassis simply doesn’t allow for. If those features are important to you, then the Streak65 probably isn’t the keyboard for you.

I didn’t feel the loss of these features too keenly during the time I had it in for testing, though. USB passthrough I can live without, for example, and the Streak 65’s volume, play, pause and skip buttons are all mapped as secondary functions onto the arrow keys and left Ctrl. Yes, hitting Fn and then another key is still a bit of a faff compared to just tapping a single key on a larger keyboard, say, but at no point did it bleed over into frustration and irritation like it did with the HyperX x Ducky One 2 Mini. 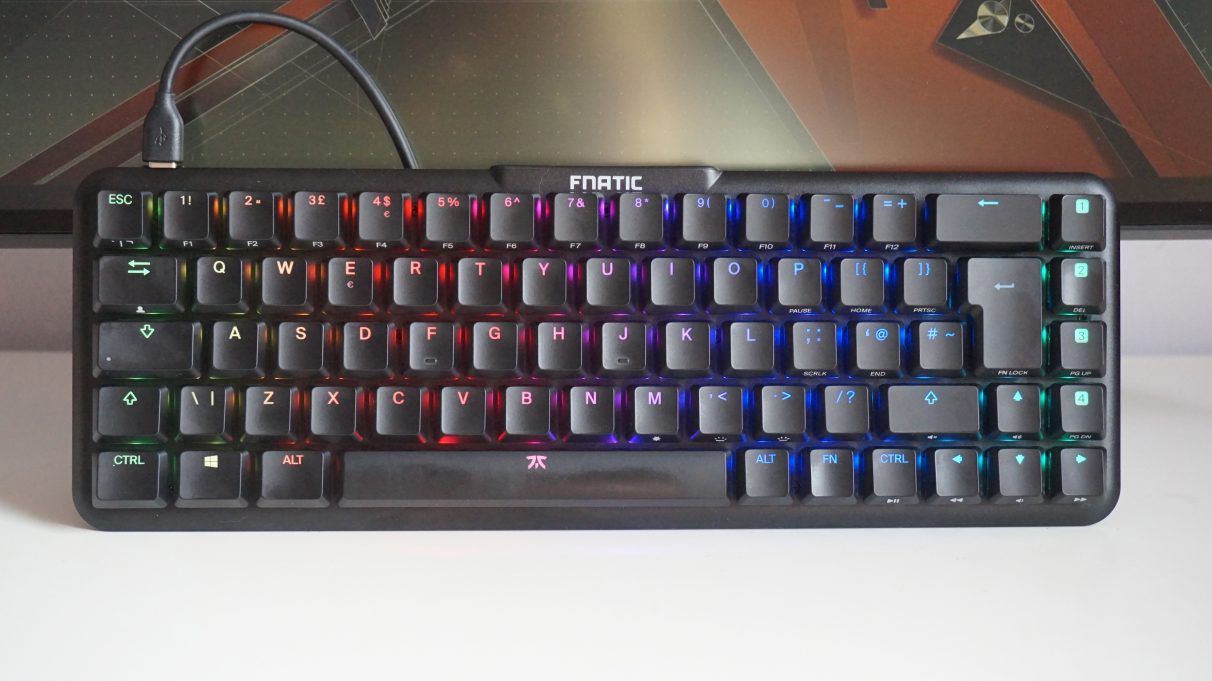 This is mostly down to the Streak65’s excellent Fn Lock feature, which can be enabled by tapping Fn + Enter. When switched on, the Fn key handily lights up white to let you know it’s active, and their clear, easy-to-see labels made it quick and simple to use multiple Fn buttons one after the other. The big saving grace compared to the HyperX x Ducky One 2 Mini, though, was just having those all-important arrow keys within reach in the first place, as they provide just the right amount of flexibility to go back and correct mistakes, edit text and get the job done quickly and efficiently without having to take your hand off the keyboard. A big boon if, like me, you want your keyboard to be able to pull double duties for games and work alike.

The Fnatic Streak65 won’t be for everyone. In terms of overall practicality, a tenkeyless model like the £100 / $110 Fnatic miniStreak or £150 / $160 Roccat Vulcan Pro TKL are probably still a better bet for most people, if only because they’re a bit easier to use and come with more features for the same kind of money.

However, if you’re determined to go ultra compact and don’t mind making a couple of compromises along the way, the Fnatic Streak65 is well worth considering at £110 / $110. It’s a much better fit for work and play than the 60% HyperX x Ducky One 2 Mini, and it’s by far my favourite ultra compact keyboard I’ve tested so far. If in the distant future I somehow end up travelling for work again and need to take a keyboard with me, the Fnatic Streak65 is definitely the one that’s going in my bag.