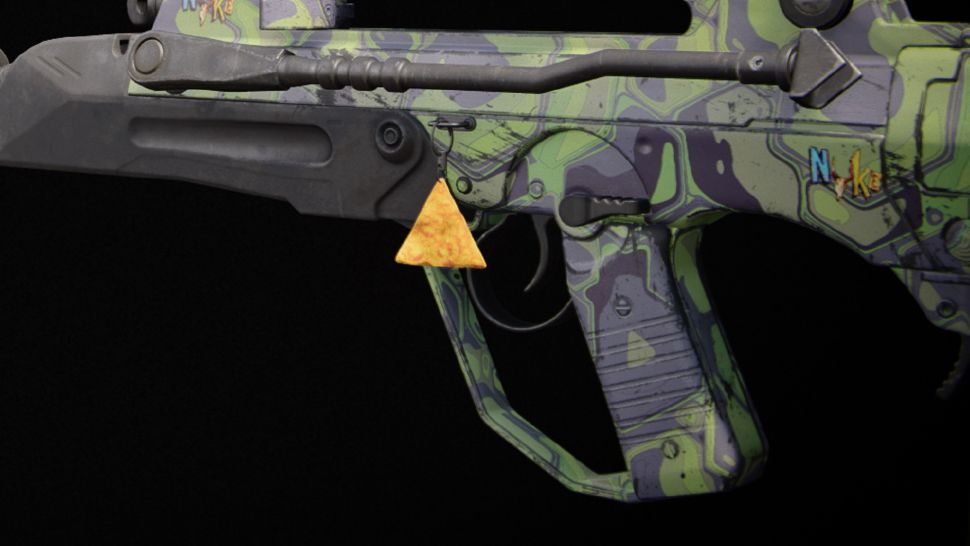 Think, for a moment, about how Call Of Duty: Black Ops Cold War‘s guns must feel in your digital soldier’s hands. Cold, hard and metallic, even through the stiff tactical nylon of your combat gloves. Now imagine it all oozing in greasy nacho flavouring powder. That, perhaps unsurprisingly, is the inescapably tactile sensation that’s stricken me since finding out you can slide into Mountain Dew’s DMs to stick a Dorito chip on your Call Of Duty rifle.

As spotted by RPS fansite PC Gamer, you can now dangle a single dorite from the side of your favourite firearm, while a new emblem will let you decorate your profile with a citric neon-green explosion of Mountain Dew.

A tasty snack for the war criminal on the go (thanks, PC Gamer)

Fortunately for my self-respect, PCG’s Morgan Park bit the (nacho cheese-flavoured) bullet and asked Mountain Dew for a gun-mounted crisp – to which the Brand confirmed he’d need to reach into the company’s greasy DMs with the phrase “#DoritosDewDrop” before pulling out a tasty tortilla. On DM’ing, the Dew will give you a code to redeem over on the Call Of Duty website.

Okay, so yes, this is all just cross-promotional branding nonsense. Even so, I can’t help but howl at the abject absurdity of dangling a Dorito from your highly-detailed, period-appropriate killing stick. It looks so dinky there, dangling helplessly, indestructible even as grenades and gunshots ravage its owner. This chip has seen war and remained unflinchingly cheese-flavoured in the face of its horrors. In comparison, the animated Dew Nuke (Dew’k? Duke?) emblem is somewhat tame.

When they’re not strapping junk food to assault rifles, Treyarch are busy announcing the arrival of Nuketown ’84, the latest iteration of the series’ suburban battlefield that’s set to arrive next Tuesday. If you’re looking for an edge, head on over to our Call Of Duty: Black Ops Cold War weapon guides to get yourself kitted out in the best gear.

And pack a healthier lunch, too. Can’t be getting killstreaks while all bloated up on tortilla chips.