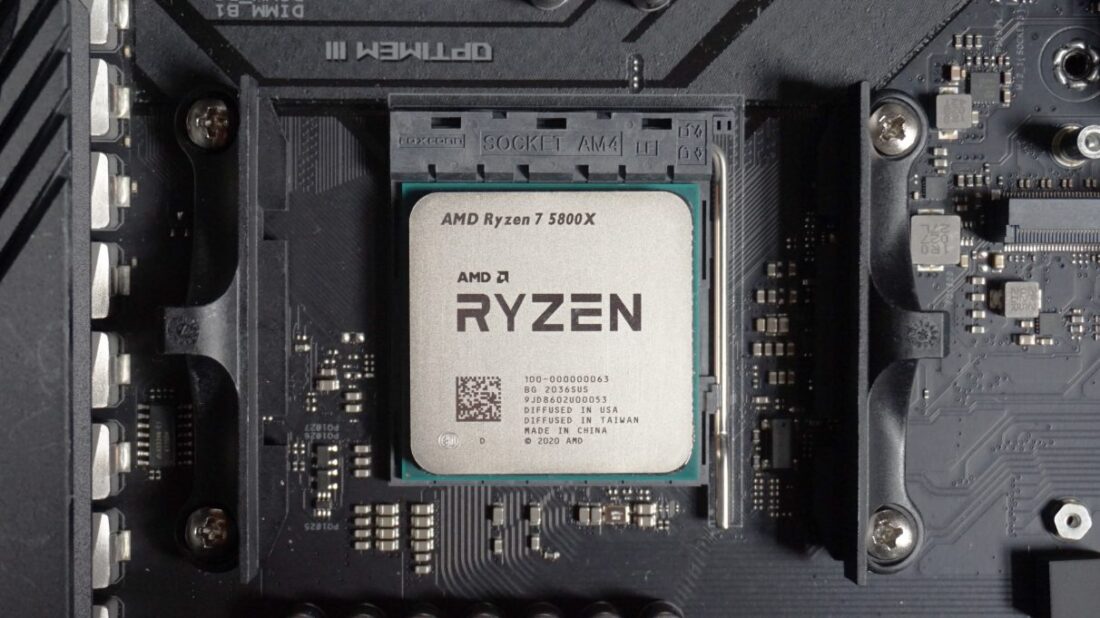 After seeing the stonking gaming speeds of AMD’s Ryzen 5 5600X at the end of last week, the Ryzen 7 5800X was always going to have a difficult mountain to climb if it was going to prove its worth as a top-notch gaming processor – especially after the rather middling gaming performance of the even more expensive Ryzen 9 5900X didn’t really leave it much wriggle room to make its mark between that and its mid-range sibling. Now that I’ve finally been able to test one for myself, the Ryzen 7 5800X succeeds to some extent, but not without hitting a few stumbling blocks along the way.

Elsewhere in AMD’s new CPU series, this gamble has paid off. The Ryzen 5 5600X’s higher price was very much backed up by its superior gaming speeds, and the Ryzen 9 5900X is also just about a better buy than its Core i9-10900K rival – even if its actual gaming speeds aren’t massively impressive compared to the Ryzen 5. The Ryzen 7 5800X also matches or bests Intel’s top Core i9 in a lot of cases, but the shadow of the cheaper 5600X still hangs long and dark over its overall performance. It’s still a great processor in its own right, but the Ryzen 5 5600X remains my pick of the bunch when it comes to the best gaming CPU.

The Ryzen 7 5800X is a better buy than its Intel competition and AMD’s more expensive Ryzen 9 5900X, but when it comes to overall gaming performance, the cheaper Ryzen 5 5600X still reigns supreme on the value for money front.

At least it does in terms of overall value. If you regularly use your PC for more than just playing games, such as editing videos, streaming online, or even a bit of 3D modelling and the like, then the Ryzen 7 5800X’s 8 cores and 16 threads will likely provide a welcome boost to those sorts of tasks compared to the 6 cores and 12 threads you get on the 5600X. Its base and boost clock speeds are also a touch faster than its mid-range sibling, starting at 3.8GHz and rising to 4.8GHz – an increase of 100MHz on both counts. Sure, it’s still not quite as nippy as the Core i7-10700K’s top speed of 5.1GHz, but as we’ll soon see in a minute, the Ryzen 7 5800X still has more than enough oomph to put it out in front over its Intel competition.

In truth, I still haven’t been able to test the Core i7-10700K, which makes a direct comparison to its Intel rival rather tricky. However, as the benchmark results show below, the Ryzen 7 5800X isn’t really competing with the Core i7-10700K. Instead, it’s actually knocking on the door of the even more powerful Core i9-10900K, likely putting to shame any Core i7-10700K results I might obtain in the future. Instead, the real problem comes from AMD’s own Ryzen fold. Yep, it’s the Ryzen 5 5600X, which is so damn good that it makes it hard to recommend any of its more expensive siblings as pure gaming processors. 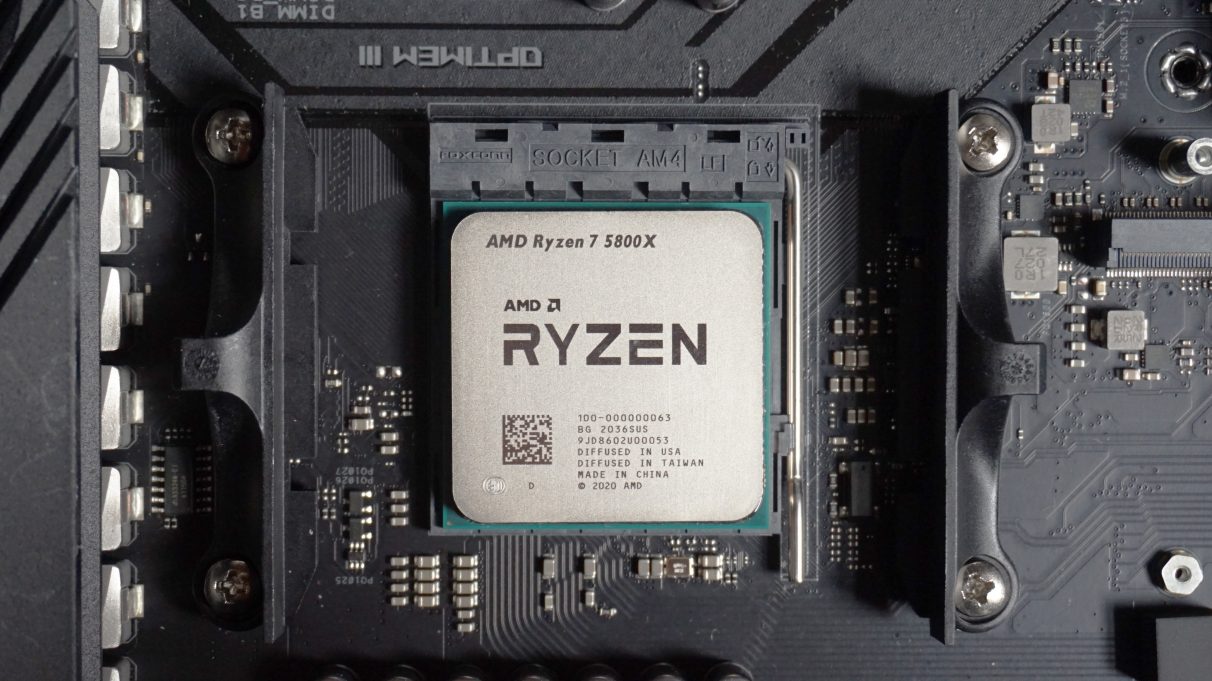 Now, as I’ve mentioned in previous CPU reviews, assessing a processor’s gaming performance is still quite a challenging task compared to other components inside your PC, as most built-in gaming benchmarks don’t accurately reflect what your CPU’s doing. Benchmarks are getting better in this respect, with the likes of Shadow Of The Tomb Raider, Forza Horizon 4, Assassin’s Creed Odyssey and the Total War series all providing a proper, in-depth look at your CPU’s performance as well as your graphics card.

However, there are lots of other factors that can affect your CPU’s gaming performance, too. These include your graphics card, the type of RAM you’ve got installed, and even the kind of storage you use to install your games on. As a result, getting a truly accurate picture of your CPU’s performance is tricky, but I’ve done the best with the equipment available to me.

Gigabyte’s X570 Aorus Master – but as you’ll see in my Asus ROG Crosshair VIII Hero review, there’s really not much difference between them in terms of overall performance. A frame or two here and there, perhaps, but no more.

And at 1920×1080, we really are talking about just a frame or two between the Ryzen 7 5800X and the rest of its Ryzen 5000 siblings. In all except Assassin’s Creed Odyssey, the Ryzen 7 5800X is quite a bit in front of both the Intel Core i5-10600K and Intel Core i9-10900K, and it shows a noticeable improvement over the outgoing Ryzen 7 3700X, too. When it comes to its own Ryzen 5000 family, though, the difference in their respective gaming speeds is pretty much nil, regardless of whether you’ve got 2133MHz RAM or super fast 4000MHz sticks. 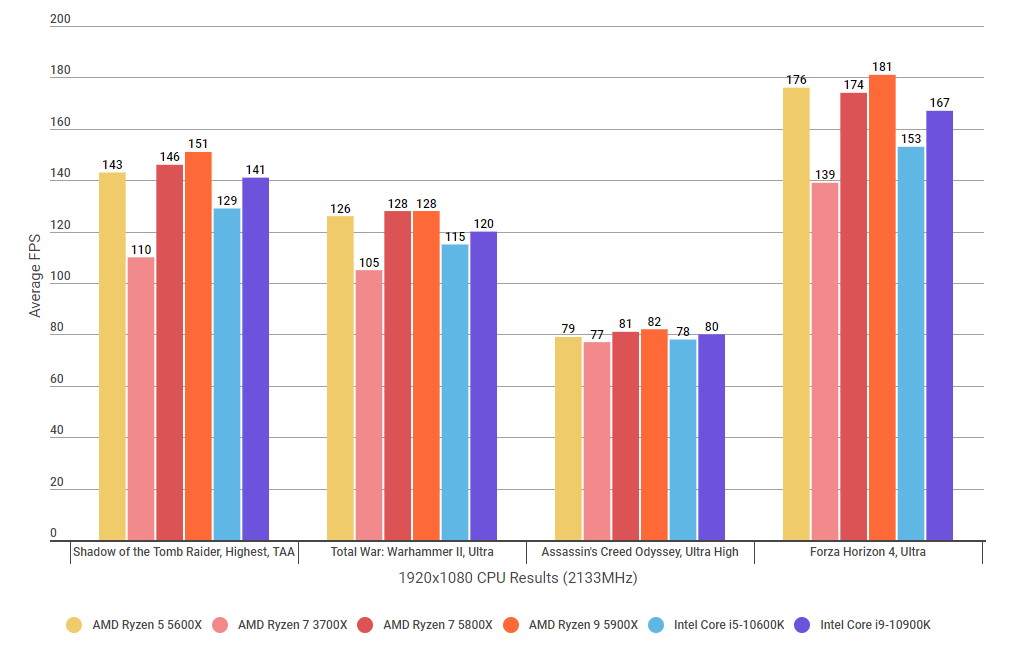 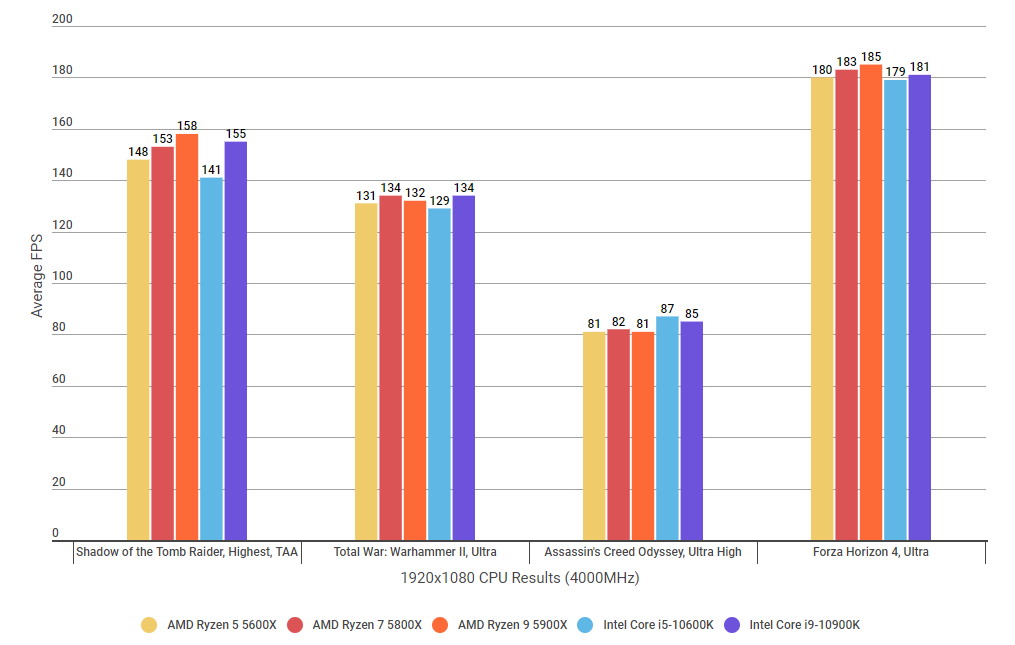 At 2560×1440, the difference becomes even smaller, with the Ryzen 7 5800X producing nigh-on identical speeds to its AMD siblings, and only a clutch more than its Intel competition. What’s more, bumping up the RAM to 4000MHz using its built-in XMP profile at this resolution didn’t show any more improvements either, and at 4K it was all pretty much even-stevens. After all, you’re still GPU-bound at 4K, making your choice of CPU much less important. 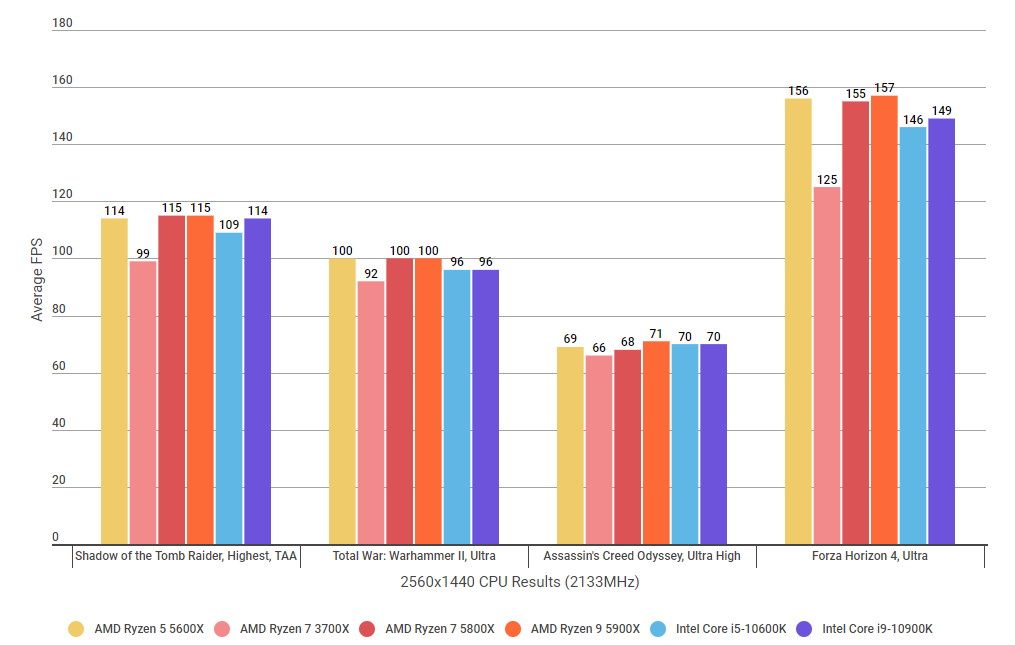 Indeed, the Ryzen 7 5800X only really starts to justify its higher price when you look at its regular desktop performance – although even then I’m not sure you’d notice the difference over the Ryzen 5 5600X unless you regularly undertake those professional creative type tasks I mentioned at the very start of this review, such as 3D modelling, video editing, steaming or a bit of animation. 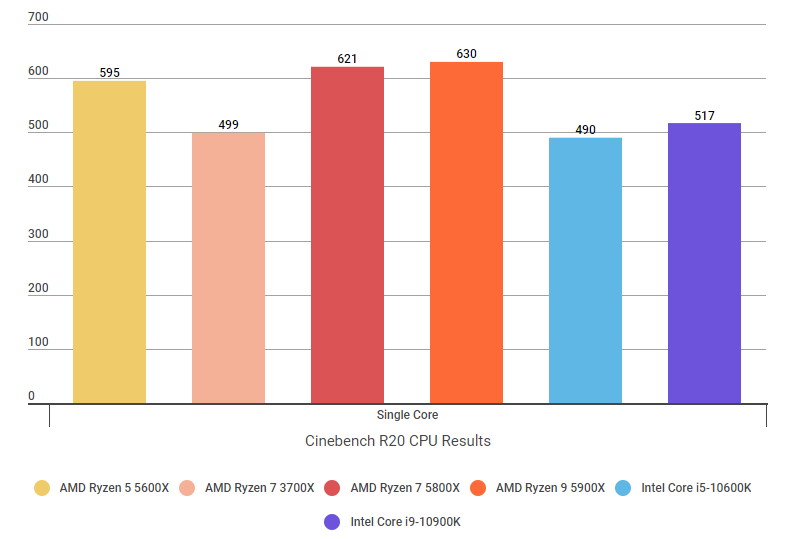 Instead, it’s only in the multi-tasking arena where the Ryzen 7 5800X can show what it’s capable of, as its multicore score of 5978 not only shows huge generation-on-generation improvements of 30% over the 3700X, but it’s also 39% faster than the Ryzen 5 5600X. It still can’t match the 10-core / 20-thread Core i9-10900K in this area, all told, but the fact it even comes close with two fewer cores still speaks volumes about the astonishing achievements AMD have made with their new Zen 3 CPU architecture (and all at a lower TDP of 105W versus the Core i9’s 125W to boot, too). 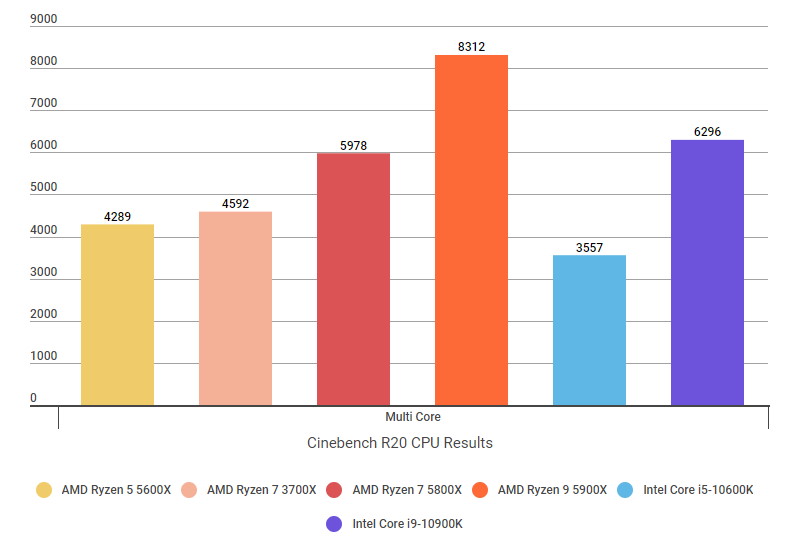 Ultimately, though, I reckon most people will be perfectly happy with the Ryzen 7 5800X’s cheaper sibling, the £280 / $299 Ryzen 5 5600X (again, if you can get hold of one). There’s simply no need to spend any more than this to get some of the best gaming speeds around, and that’s regardless of whether you’re playing at 1920×1080, 2560×1440 or 4K, or have fast or slow RAM. The Ryzen 7 5800X is worth considering if you need your PC to pull double duties in your professional life as well as play games, but if all you’re after a good value gaming CPU, then the Ryzen 5 5600X is definitely the one to go for.

Besides, you’ll also need to factor in the extra cost of a cooler with the Ryzen 7 5800X if you don’t already have one, as it doesn’t come with one in the box. The Ryzen 5 5600X, on the other hand, comes bundled with AMD’s very good Wraith Stealth cooler, making it an easier (not to mention cheaper) slot-in upgrade for new PC builders. The Ryzen 7 5800X is a better buy than the Ryzen 9 5900X, but nothing trumps its exceptional Ryzen 5 sibling.