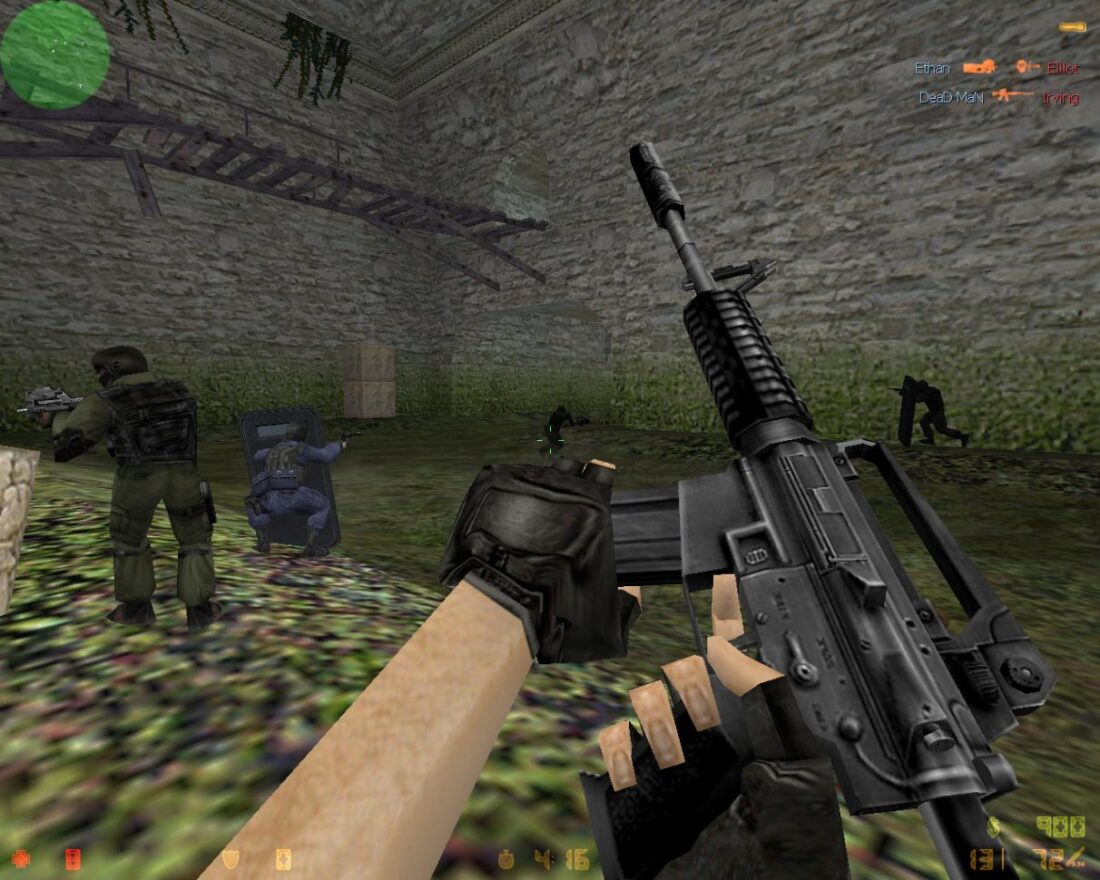 On the 9th of November, 2000, Valve released version 1.0 of Counter-Strike. The tactical shooter had started as a Half-Life mod in beta the year before, originally created by Minh “Gooseman” Le and Jess Cliffe, and became the star of the scene. It’s weird to say now, but a twitchy teamplay FPS with a grounded paramilitary setting and realistic style really did stand out. V1.0 wasn’t the end for CS though, as Valve kept expanding and updating it for years, and used it as the testbed for new tech including Steam. It set the model for ‘live service’ games as we now know them.

Two teams: terrorists; and counter-terrorists. Each has competing objectives to complete each round, like rescuing hostages, planting a bomb to destroy an objective, or assassinating a VIP. Starting with merely a pistol and a knife, they earn money to buy fancier weapons and gear across the match – which are lost if you die. Weapons can be deadly, killing with a few critical hits, or completely useless if you’re not careful. And… by and large, CS now is what it was then. It’s the same basic game of twitchy aiming, controlling chokepoints and lines of sight, coordination, and swearing to yourself when you catch an AWP bullet in the head. Movement, shooting, and other specifics have changed a bit between games, but across decades it’s still basically just CS – a series which became its own genre, a forever game. You might play tennis on grass or clay but it’s still tennis.

While many multiplayer games would release new maps and things for a while before soon moving on, Valve kept at it for years. They understood that if enough people were buying and playing your game, you could just keep working on it. After v1.0 launched, they overhauled old maps and added new ones, redid models, boshed in new weapons like the Famas and new gear like the riot shield, and kept polishing. Didn’t hurt that a level editor let players make their own maps too (which I could talk about for days). 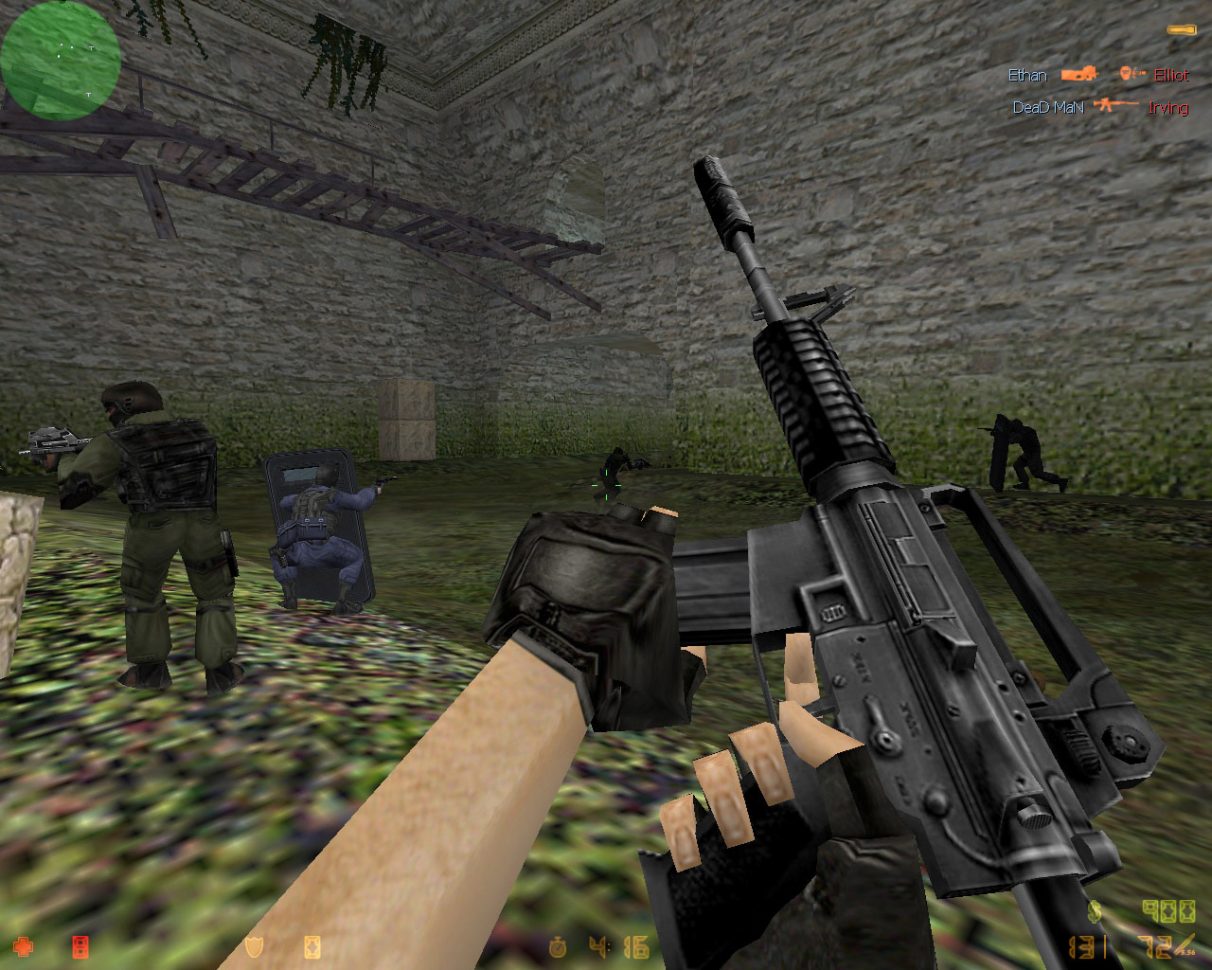 Valve supported CS as with new technology too, a step beyond most. It was the first game with Valve Anti-Cheat. Valve added built-in voice communication, a feature I’d almost forgotten we ever had to arrange for ourselves with software like Roger Wilco and TeamSpeak. They put bots in, then swiftly took them out. Four years after launch, they added new options to customise crosshairs because hey, it’s not necessary but people would like it. Players got new features, and Valve got to test new technologies and services – most of all, Steam.

Counter-Strike started the live service tradition of using a popular game to force players onto a janky, slow, and unwanted store client. Years before Battlefield 4 or Fortnite, Valve forced players to swap onto their shiny new Steam to continue playing CS after the old multiplayer services shut down. Steam sucked. Steam was truly awful for years. I cannot overstate how much I did not want Steam. But if you wanted to play CS (or other Half-Life-based games), you had to use Steam. So people did. And look at it now.

While Counter-Strike 1.6 is the last major revision of CS, released in 2003, Valve haven’t stopped. Over the past 17 years they’ve updated technology to play nice with modern systems, fixed bugs, removed exploits, and squeezed in the odd feature or two. Even the latest patch, released in August 2020, added a new weapon-switching option alongside fixes for crashes and exploits.

In all truth, I never really got into CS. I’d rather be strafe-jumping around Quake 2. I still played CS, of course, because my pals played CS. I do hold a minor grudge, mind: CS was so popular it stunted the Half-Life mod scene. For years, it seemed like every other new mod announced was a tactical paramilitary shooter. Even if most didn’t make it past the stage of untextured weapon renders posted on Planet Half-Life. But I can hardly blame CS for being so big and popular that it inspired hundreds of people to create their own homage.

I respect Counter-Strike’s legacy. Yesterday, plain ol’ CS 1.6 still had more concurrent players on Steam than the cultural phenomenon that is Fall Guys. CS is always just there, keeping on doing its thing with thousands of people – while its youngest sibling, Counter-Strike: Global Offensive, has more players than anything else on Steam.